The Solomon Islands Planting Materials Network (PMN) was set up to: 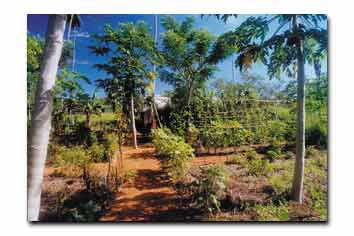 The PMN started in 1996 with a series of workshops in the Solomon Islands led by Jude and Michel Fanton from the Seed Savers Network in Australia.

Duration: The project started as part of the APACE Kastom Garden Project in 1995 and continues today as an independent non-government organisation registered in the Solomon Islands.

The network acts as a clearing house for agriculturally useful seeds. Seeds sourced from farmers are grown and multiplied at seed centres in Honiara and other locations.

Seeds are stored for as short a time as possible so they do not lose their viability. It is the farmer’s gardens that act as the seed bank.

Confirmation that the Planting Material Network was on the right track came in a late 1990s report to UNICEF Pacific by New Zealand consultant, Peggy Fairbairn-Dunlop.

She proposed that seed saving become a part of all the agricultural training activities of development assistance organisations working in the South Pacific to promote food security.

The decentralisation of the network started in 1999 following the placement of Australian, Emma Stone, with the PMN as a trainer.

The Munda seed centre was established in late 2000 as a response to the worsening internal security situation in the Solomons. Other, smaller seed production locations were started in different provinces.

As the armed conflict of the year 2000 forced seed curators and other staff at the Burns Creek seed centre to evacuate to their home islands for their own protection. The experience emphasised the wisdom of decentralising the PMN, a process that had already started.

In response to the security crisis:

In excess of 100 indigenous and exotic species are conserved by the network.

These include exotics (plants originating outside the Solomon Islands and introduced by missionaries, government, traders, businesses and aid agencies) that have naturalised – that are capable of reproducing in the climatic and soil conditions of the Solomon Islands.

A reason for conserving the seed of indigenous vegetables is that the use of a food plant may decline. Maintaining the plant through the Planting Material Network ensures its survival and availability for reintroduction to the local diet at a later date.

It was soon after arriving in the Solomons to start the Kastom Garden Project in 1995 that Tony Jansen realised it would not be necessary to import vegetable seeds from Australia.

That was because there were local plants that were:

The PMN is now focusing on two main developments:

After more than six years of work in the Solomon Islands, the PMN has gained recognition throughout the region for its innovative work.

The PMN was set up as a model capable of replication elsewhere in the South Pacific and South East Asia.