As a result of the work done by Graham Lyons, Lois Englberger and Jeff Daniells when they did the banana and sweet potato nutritional awareness workshops in the Solomons (Makira) in collaboration with Kastom Gaden Association, a follow up ‘Go Local’ banana diversity project will be implemented by KGA, under the auspicious of Secretariat of the Pacific Community (SPC) – Genetic Resources Division/Centre for Pacific Crops and Trees. The work showed really clearly the incredible genetic diversity that exists in the Solomon Islands and importantly the nutritional diversity. 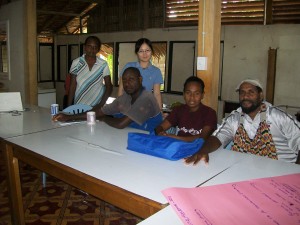 This small project was funded by ‘The Christensen Fund’  and will be implemented in two sites. One will be at Atoifi Adventist Hospital (Kwaio) in Malaita province and the other at Aruligo on Guadalcanal province. The project ‘Go Local: Using Traditional Banana Diversity to Strengthen Food, Nutritional and Cultural Security of Communities in the Solomon Islands’ will involve the collection of local Banana varieties and establishment of 2 Genebanks on these sites and 2 other sub-operating sites at Sukiki on Guadalcanal and Kwaibaita on Malaita.

As the first step towards the implementation of the project, a two days planning meeting was held at the KGA head quarter – Burns Creek on 15 – 16 June 2010. Participating at the meeting were representatives from the Atoifi Hospital, 2 lead farmers at Aruligo and staffs of Kastom Gaden Association, who will be implementing the project over the next 12 months duration.

Initial discussions during the workshop identified the following to be among the set of criteria for selection of the unique varieties:

KGA attached the fundamental importance of food crop diversity and conservation to its program, and with the previous Makira project experience, it is felt that the same project should be carried out in other provinces to see what diversity  they have there. It is also important to try and save some banana varieties which some how no longer exist in some parts of the Islands.

On the other hand, KGA is encouraging our people to grow and eat more local produce for food security and sustainable healthy living. The ‘Go Local’ project aims to increase production and consumption of local foods using its rich and most biodiverse food systems.

Changes in lifestyle and diet over recent years, resulting in an overdependence on imported foods, have led to a worrying upward trend in obesity, diabetes, heart disease and cancer in adults and micronutrient deficiencies in children. However, as a result of KGA’s effort and anticipated successful outcome of such projects as the ‘Go Local: Using Traditional Banana Diversity to Strengthen Food, Nutritional and Cultural Security of Communities in the Solomon Islands’ KGA is optimistic that communities will once more opting for healthier diets based on their rich cultural heritage of local foods.