Nana community is comprised of a number of small villages and is situated on the eastern part of Makira Island, and it is one of the most isolated places in the Solomons.  The women of Nana want to learn new knowledge and skills on how to prepare different types of food for their children and families.

Recently the womens within Nana were trained on how to prepare and cook different types of food using local food crops grown in their gardens. This is made possible with the local recipe book and funds provided by Kastom Gaden Association who has worked in partnership with Stuyvenberg Rural Training Centre. Madam Hilda, a Home Economic’s teacher at Stuyvenberg RTC, conducted the training which were held at the centre and at Tawaroga village. 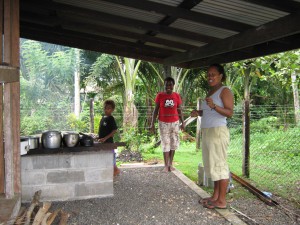 Madam Hilda at the kitchen- cooking 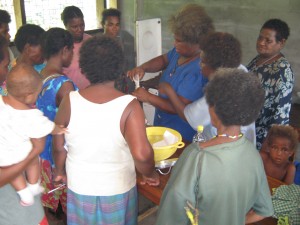 The participants keen to learn

According to the women’s spokesperson Mrs Julia Tawea, she said that the women were really happy and thankful to Stuyvenburg RTC and Kastom Gaden Association for the training. She said that the women will put to use the skills gained during these trainings, by cooking different foods using simple local recipes. What is heartening about the training is that we had learned different methods of cooking which only uses local garden produce that are grown in our gardens, rather than the stuff from the shops which are expensive, she commented. In addition, the training will really help us to improve the diets of our childrens and families, as this is a common problem experienced within our community.

According to Kastom Gaden Association, the principle behind the training program is to encourage people to eat more local food crops that are grown locally, to improve the health and wellbeing of the peoples.  At the same time, KGA expects that the people will appreciate the importance of growing and eating local food crops that are sustainable and healthy, to sustain family food security.

The work of Stuyvenburg Rural Training Centre  in promoting food security through organic farming methods is thanks to support from the Australian Government in their assistance to Kastom Gaden Association under the AusAID Agriculture Livelihoods Program.