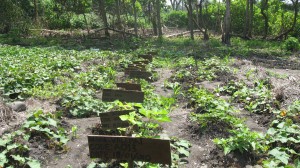 The sweet potato trial is a joint program with CIP and MAL with two trial design. These two trials were supposed to be implemented as early January 2010, but the time taken to identify the site/ area had delayed it to February, when it was started.

The newly  introduced varieties from SPC (19) sweetpotato at Aretakiki are to identify the performance at local condition.

So far we have completed the 2 trials and continue our monitoring on both sites. The local varieties has progressed well even though a quarter had died because of dry weather when planted. Both trials will last for 4 months duration before they mature. The Henderson trial will be ready in May/June and the Areatakiki trial will be in July 2010.

To conclude, I’m pleased with the trial even though we had some challenges. We need to do more of these trials with farmers so that they understand the importance of planting more varieties of sweet potatoes using different methods, etc.