KGA’s urge to improve food security by increasing crop diversity among rural households in Solomon Islands has been boosted with the distribution of eleven best local cassava varieties recently.

The varieties were collected from Guadalcanal farmers and were bulked at the Henderson site over the last 8 months period. Athough they were planted around the same time, there are indications that some were either matured in time or over matured at the time of harvest. This needs to be further observed in the future, however, all the varieties had produced better yields. 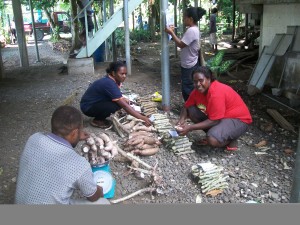 Before distribution, crop characterisation was undertaken to describe the physical features of the defferent varieties such as flesh colour, skin colour and shape. They are also evaluated to identify qualities in terms of taste, disease resistence and productivity/ yields.

The new cassava varieties were distributed to all the 10 KGA rural based partners and some PMN members. They will be bulked by the partners for the next 8 months before cuttings can be made available to other local farmers.

According to KGA’s Crop Technician Mrs Verlyn Lina, the cassava varieties can be grown in most parts of the country and produce high yields as in Guadalcanal.